I have a confession to make.  Despite my love of all things green and leafy, historically I have been pretty hopeless with houseplants.  They are generally to be found looking slightly sad on windowsills around our home having been either over or under watered, under fed and left in their too small pots for too long (maybe ‘a sadness of houseplants should be the collective noun).  However, when one of my favourite local coffee shops announced they were taking over the unit next door to open a plant shop, naturally it piqued my interest.

The key according to Milli, owner of soon to open The Violet Palm, is to fill your house with plants.  “You can’t forget about them when they’re everywhere.”  She admits that when she and her husband opened their café The Flower Cup a little over 18 months ago, she knew little about plants.  As the name suggests selling flowers alongside the cake and cappuccinos was always something that had been part of the plan, but stocking houseplants only came into the equation when it became clear that there was a burgeoning demand.  First there were a few cacti and then, when they proved popular an increasing range of other plants, to the point that they became a significant part of the café’s identity. I can confirm from my own experience that allowing customers to gaze at an attractive display of plants while sipping on an artisan coffee is a very effective sales tactic! 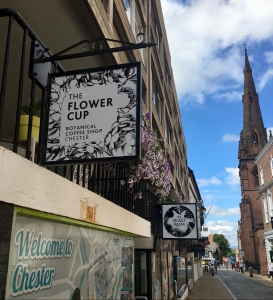 Although the evolution of The Flower Cup into fully fledged green oasis was primarily market driven, Milli has also become swept up by the houseplant boom. “We started getting really into plants ourselves, learning more about them, and now our house is like a jungle! My new thing is bringing back plants from the dead – I’ve even got a little nursery at home.”  Like many people (including myself), Milli and her husband only have access to a small courtyard garden at home which is currently a work in progress.  With almost half of all 25-34 year olds in rented accommodation and home ownership down amongst most age-groups, opportunities to develop a garden may be limited for many people.  Yet, the current demand for houseplants suggests that green space, whether indoors or outdoors, remains highly desirable. “It’s nice to have plants inside” says Milli. “They definitely bring something different to a house.  They’re interesting and soften up a room.”

Having the opportunity to bring plants home from work has allowed Milli to gain an understanding of the environment which encourages them to thrive through a certain amount of trial and error.  However, she has recognised a demand from customers to learn about plants and flowers and the difficulties some may have accessing classes, an issue I touched upon in my previous blog on lifelong learning.  Floristry workshops have already been a feature at The Flower Cup, but these will now be developed further at The Violet Palm, extending into aspects of houseplant care and display such as terrariums.  “It can be hard if people have full time jobs, and there aren’t a lot of night classes available, so it’s something we can offer.” The workshops will take place around a large, rustic wooden table which is the centrepiece of the shop and will be limited to 8 places so that participants get lots of individual attention.  I think this is a great idea as a way of giving people the confidence to try something different or even to get into plants for the first time.

With houseplants currently being so popular chains such as Wilko and B&Q are stocking an increasing range and Milli notes that this will be a key challenge for The Violet Palm.  It is impossible to compete on price with the buying power of the chains allowing them to sell their plants more cheaply than a shop like The Violet Palm.  “People think it’s buttons to buy plants but it’s the journey it takes.  We get our stock from Holland via a UK supplier, so they take a cut, but hopefully eventually we’ll have the volume to order direct.”

We agree that although the chains may be cheap their plants can often be unattractively displayed, vaguely labelled and sometimes in poor condition.  As well as looking to stock more distinctive varieties, The Violet Palm will be providing specific plant care information with the plants they sell so that people know how to look after them once they get them home.  The shop is also partnering with other businesses such as local supplier Dandy’s Topsoil for the provision of bespoke growing media, as well as plant food specialists, Growth Technology. Overall the aim will be to provide a one-stop-shop with plants, pots appropriate compost and plant food all available together.  Deliveries will be also available in The Violet Palm branded van (another way of getting the name out around the city) and an online shop will be launched later in the summer.

It’s not only Milli who has grown to love plants.  The other staff at The Flower Cup are also now getting hooked and can be found comparing pictures of their prize specimens. As someone who started their gardening journey with a few pots of pansies in an otherwise unattractive back yard, I find the idea that people are seeking out ways of greening whatever space they have quite heartening.  It would be easy to assume that an interest in plants is only for those lucky enough to have large gardens, but you only need to look on Instagram to see that there is a huge appetite (and industry) for succulents, cacti and other houseplants.  I’ve loved seeing some of the stunning displays that James Wong has been posting on social media from his own small London flat, and I’ve heard good things about Jane Perrone’s podcast ‘On the Ledge’ about growing indoors (happily these two worlds have collided with Jane interviewing James for a recent episode).  So perhaps it’s time I reappraised my own rather lack lustre approach to houseplants and joined in the fun!

4 thoughts on “The Violet Palm”