When the Royal Horticultural Society (RHS) announced that after many years of searching for a suitable site it would be establishing a new garden in the North-West of England, I was over the moon. Despite having been a member for several years I have never actually visited an RHS garden so the prospect of having one on the doorstep, relatively speaking, was cause for celebration. The news that the RHS was offering members the chance to tour the Bridgewater site while under development was an opportunity not to be missed. So earlier this week myself, and my garden designer friend of The Cheshire Garden, headed off up the motorway to see what was in store, and we were not disappointed!

The RHS Bridgewater garden is being created on the former site of Worsley New Hall, once the estate of the Earl of Ellesmere. The RHS describes it as its first “urban garden” located as it is just off the M60 within the boundary of the City of Salford, and enveloped in the sprawling conurbation of Greater Manchester. The first thing that strikes you as you turn down the approach road is the sheer enormity of the site – 154 acres all told. The vista across the estate from Leigh Road I have to say doesn’t exactly scream “urban”, encompassing as it does extensive fields, woodland and a tree-lined canal. However, its location, in the hinterland of such a densely populated area, offers a potentially fascinating juxtaposition of the rural and the city. It will provide a great platform for the RHS to promote the role of gardening and horticulture in enhancing urban spaces, which is a cause close to my heart.

RHS Bridgewater is a vast and diverse project and the site is a hive of activity as various elements are progressed towards the target of opening in Summer 2020. We saw evidence of how parts of the site have been used in recent times as a garden centre and by the Scout Association but it has required a huge effort to clear vast swathes of dense vegetation to reveal its hidden charms. Indeed it is fascinating even now to witness how thoroughly nature has colonised what was once an impressive formal garden. This has already started to yield results as plants which have previously been stifled by thugs such as Rhododendron ponticum and Sycamore have once again started to re-emerge. 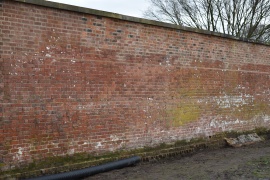 The primary focus for the first phase of development is the Walled Garden – itself a generous 11 acres – which will encompass a Paradise Garden and Kitchen Garden designed respectively by the glitterati of Tom Stuart-Smith and the Harris Bugg Studio along with a Therapeutic Garden and The Learning Garden. At the moment this area is nothing more than a sea of Mancunian mud edged by the now fully revealed and restored original red brick walls, so it will be exciting to see how it is transformed.

Elsewhere the historical lake has been drained and dredged revealing not only a large muddy puddle but a couple of surprise islands and what appears to be a sandstone folly, and this is to be restored to its former glory. We were told that the wider site will be ‘managed’ and accessible to the public, pending further future development work. Overall the garden offers a great variety of different environments to experience with formal gardens, woodland, lakeside and meadows which will be fantastic for both visitors and wildlife alike.

The RHS has a number of stated ambitions for RHS Bridgewater. Promoting environmental awareness is one such aim and this is already evident in the way in which materials emerging from the site are being reclaimed and reused. Everywhere were piles of bricks, stone work, cobbles and logs awaiting redeployment, while the curlicue branches of the ubiquitous Rhododendron ponticum have been ingeniously turned into fences. The promotion of the health and well-being benefits of gardening will be manifest in the Therapeutic Garden.

Providing learning, training and employment opportunities is another objective which is already being realised as local firms are being used wherever possible. Meanwhile two students from Manchester Metropolitan University won the competition to design The Learning Garden which will itself be used to promote engagement with horticulture. A link has even been developed with Eccles College to bring Animal Husbandry students on site to work with the heritage pigs which are being used to turn over the soil where an orchard will be established. Whisper it, but a longer term ambition of setting up a Northern Horticultural College on the site of the previously demolished Worsley New Hall has been mooted.

The tour of the RHS Bridgewater site was an absolute treat – what a privilege to see such a huge project as it is under development. It is gratifying to hear that the focus is not only restoring a historical site but creating a truly contemporary garden, and one which can perhaps deliver an experience with greater relevance to city dwellers. Although I was always excited about RHS Bridgewater, I don’t think I had fully appreciated the significance that a garden of this scope and ambition could have for the region and its inhabitants. The RHS have now opened up tours of the RHS Bridgewater site to the general public so if you have the chance I would encourage you to take up this unique opportunity.