London is a city in which I have spent plenty of time over the course of my life, but it’s been a couple of years since my last visit. This recent sojourn was prompted by the birthday of one of my oldest and dearest friends, providing a rare opportunity for a day out unencumbered by parenting responsibilities. There are few things I love more than walking around a city – navigating your way through its streets you really get to experience the details and fabric of its life.  So, before I joined up for an afternoon of craft beers, I took the chance to have a meander.  The area around Kings Cross, which I remember being fairly grotty in the past, has been undergoing major redevelopment.  It is now awash with smart new office and apartment buildings, surrounding public squares with trickling fountains, interspersed with designer shops and high-end restaurants.  However, the place that I wanted to seek out was the antithesis of these symbols of modern living. 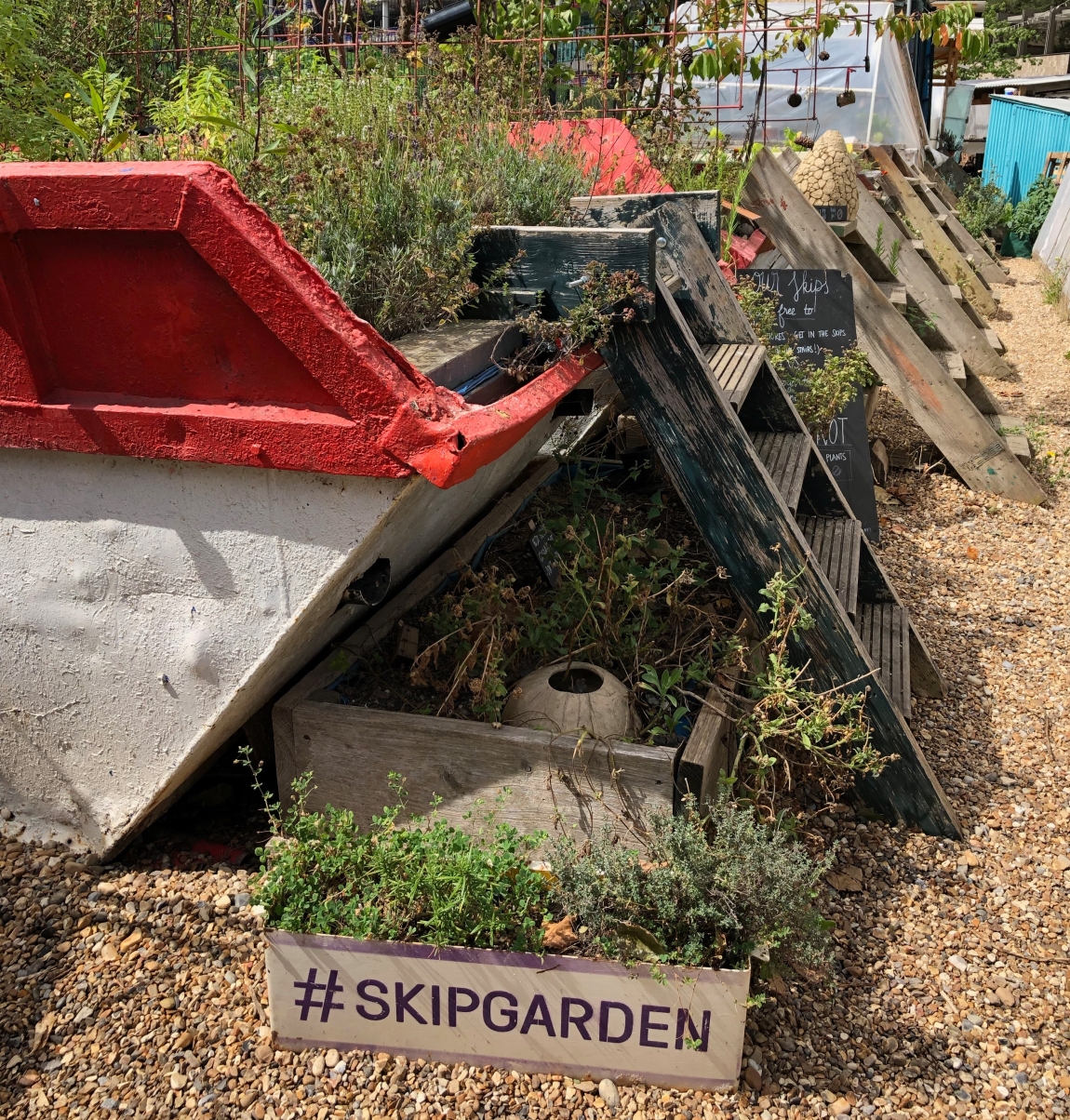 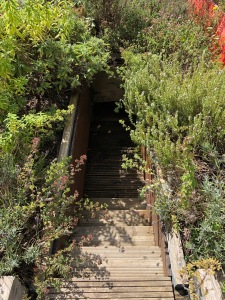 The Skip Garden is a community garden created by educational charity Global Generation.  It is an ingenious concept: an edible garden based around the use of skips as growing containers so that as the land around Kings Cross is developed the garden can simply be relocated to a new base.  In August 2019 the garden is in its fourth location, at the North end of Lewis Cubitt Park.  As you approach you are greeted by a stack of shipping containers and wire fencing marking the perimeter of the garden, in keeping with the building sites it occupies.  There, just inside the gate, are the parade of skips which to which the garden owes its name.  The skips have been re-fitted to create a central standing area surrounded on three sides by narrow beds, and with a short flight of steps for access.  This makes it easy to harvest the produce, and visitors are invited to clamber in and take a look at what’s on offer. 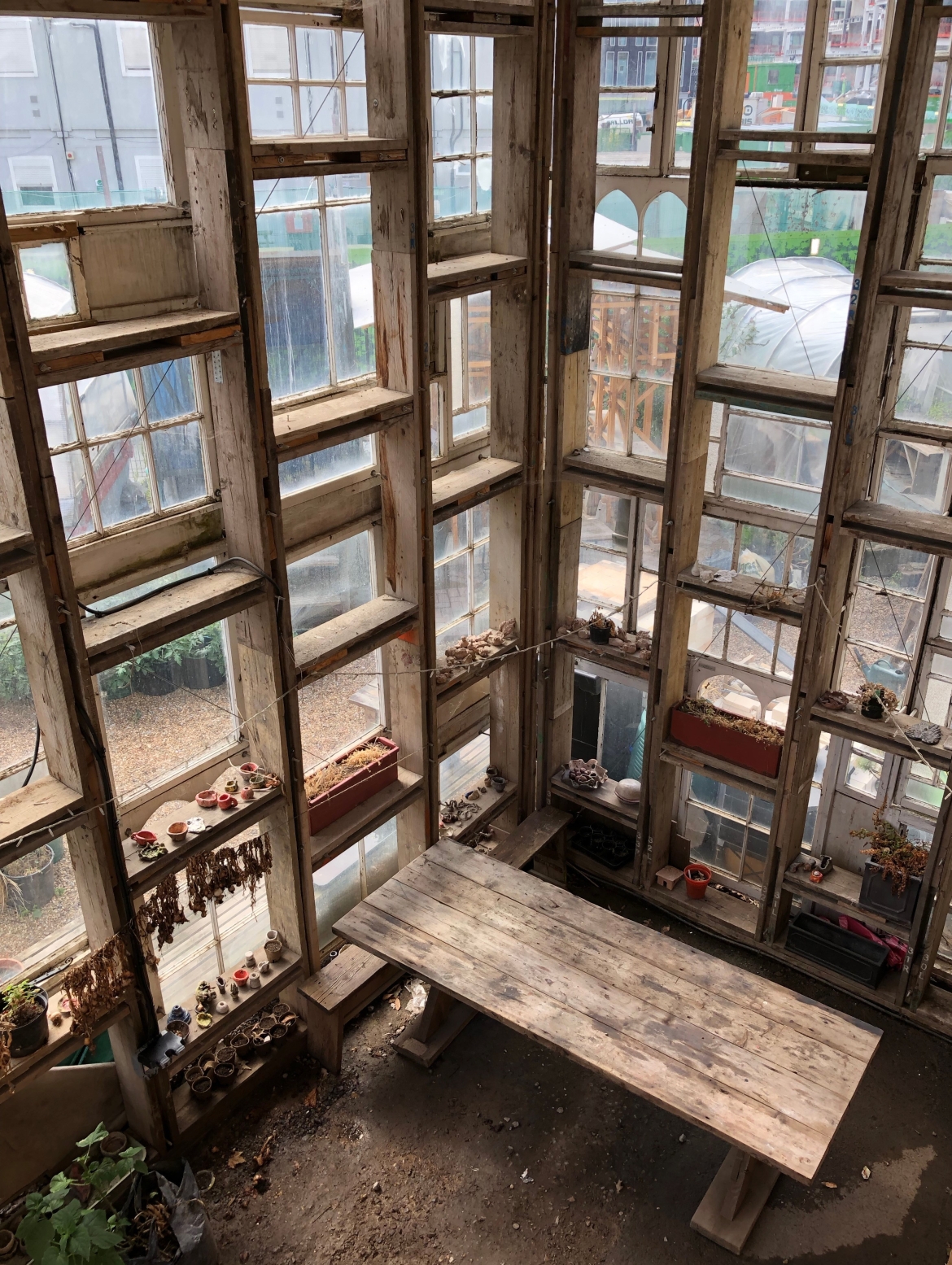 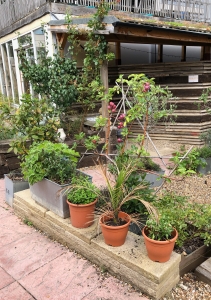 The skips are only one element of the reclaimed building materials from which the structures of the garden are built.  A long ‘polytunnel’ is constructed of wooden sleepers and slabs of old concrete, and at the point that I visited, was housing a whole array of salad crops.  Elsewhere a building known as ‘The Lantern’ has been engineered from old windows to create an indoor space which may be used for meetings or other gatherings and, it would also appear, drying onions.  An area of decking is composed of old scaffolding boards which makes for a solid but weathered finish.  Plants are grown in all manner of containers from troughs and tins to pots of all shapes and sizes, and even an old wheelbarrow.

The produce from the garden is used in the Skip Garden Kitchen.  Here you find an open kitchen and counter full of delicious looking home-baked cakes, while jars of preserved crops from the garden in hand-labelled jars occupy various shelves.  An information board states that the profits from the kitchen are “re-invested into training for local young people to become eco-innovators”.  This I guess is where the soul of the garden resides.  It provides a vehicle to bring together residents, students, businesses and young people from the local area around an ethos of sustainability.

There is much about the Skip Garden that I loved.  One of the things I like about being an allotmenteer is the culture of resourcefully giving discarded items a new lease of life on the plot – wooden pallets as compost bins, old tires as growing containers, plastic bottles as cloches.  This approach is fundamental to the Skip Garden and the use of materials associated with construction also serves to create a cohesive industrial style.  Similarly, I know only too well the unbeatable sense of satisfaction that preparing a meal from produce you have nurtured from a seedling on a windowsill to harvest gives, so edible gardens will always have a place close to my heart.  I love the charming ramshackled appearance of the garden, and its human scale spaces.  In amongst the pristine new developments looming over it, the Skip Garden puts me in mind of the dilapidated apartment block saved from demolition by alien robots in 80s family favourite ‘*batteries not included‘. 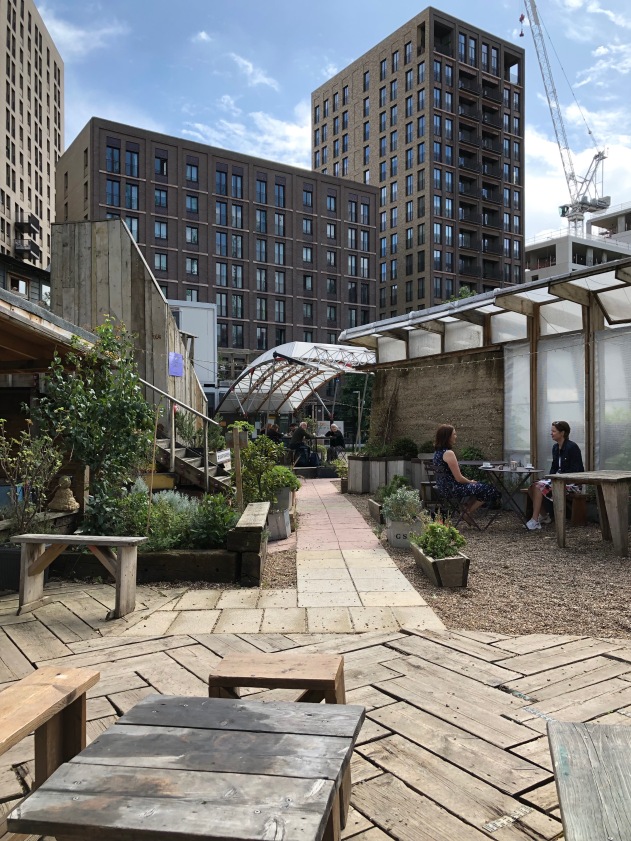 Yes, it is all quite right on, but frankly in a world of fake news and divisive politics I will take some idealistic community engagement any day of the week.  Plus they make a cracking latte!

If you have enjoyed this article please share it with others!

2 thoughts on “A Moveable Feast”