I recently published a blog on 10 Tips for Attracting Wildlife to your garden which started with “Feed the Birds”.  This was soon after the annual RSPB Big Garden Birdwatch in which the UK public is asked to submit details of the birds which visited their garden during one hour over a weekend at the end of January.  The data is then used to evaluate bird populations across the UK.  Inevitably during the hour we chose to undertake our birdwatch we had a single solitary Robin pay a visit and nothing else.  Knowing that we frequently get a wider range of birds, and having recently enhanced the bird feeding area in our garden, I thought it might be interesting to conduct a slightly longer survey to see which visitors we see most often and in the largest numbers.  This is a blog about the results of the survey which demonstrate that you don’t need a large garden, or to live in the countryside, to engage with wildlife.

Ours is a small patio garden (30sqm) in a residential area approximately a mile from the city centre.  Though pretty tiny it does boast a mature ornamental Cherry tree and backs onto a disused railway line which is now a cycle path lined with trees and shrubs.  Indeed just over the back fence there are brambles which not only give us with a welcome supply of blackberries during late summer (yum!) but also provide a source of sustenance for the local bird population.  As a consequence we possibly get more woodland birds in the garden than might be the case otherwise.  We have been feeding the birds for quite some years but recently upgraded the feeding area from a rapidly disintegrating bird table plus feeder hanging from the tree, to a nice new free standing feeding station which supports three feeders plus scraps tray and water bowl.  The feeders contained the following:

The RSPB Big Garden Birdwatch asks participants to observe the birds that visit their garden during one hour on a designated weekend.  I decided that for my own survey I would record visitors over a period of 10 days.  I find it difficult to dedicate a full hour to observing the garden (small child!) so instead I just made a note of which birds visited the garden throughout the day whenever I had the opportunity.  This is fairly easy as our house is small and open plan and it is possible to see into the garden from virtually the whole ground floor, as well as from the rear of the upstairs.  There were two other key principles:

Although the amount of time spent on observation varied according to the other demands of the day I would not say that there was a correlation between longer observation and recording higher numbers.  Bird activity tended to come in flurries so you might see lots of visitors in the space of 10 minutes or very few over a much longer period.

The following charts provide some insight into the results from the bird survey.  An interactive storyboard version can be found by clicking here: Feathered Friends’ Feeding Frenzy

Both the average number of overall visitors per day and the overall number of species seen over the 10 day period were in double figures. 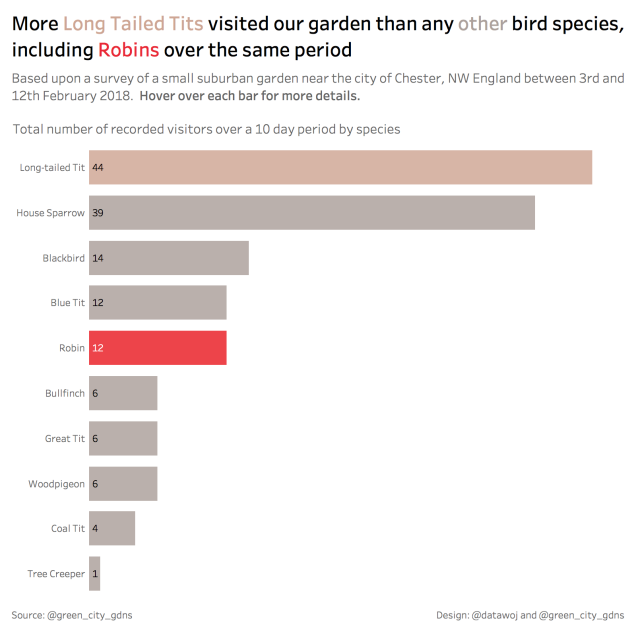 The majority of visitors were small birds with only Blackbirds and Woodpigeons representing medium to larger sized species.

There were also double the number of Blue Tits recorded compared with Great Tits and Coal Tits.

Long-tailed Tits visited both most frequently and in the highest numbers as they are, like House Sparrows, flocking birds.  Robins were frequent visitors but as largely solitary birds were seen in much lower numbers.

It is recommended that different feeding stations aimed at different types of birds are distributed around the garden, but in one as small as mine this is not really feasible.  As a result there can be significant competition at the feeders and larger birds can temporarily deter smaller species from visiting.

Anyone can be a ‘twitcher’

I hope what this little study shows is that by providing some appropriate bird feed it is possible to bring wildlife right up to your window, even in small gardens and densely populated areas.  Not only is it a joy to watch our feathered friends outside the back door but it is important that as natural habitats are continually eroded we do what we can to provide alternatives.  I would encourage everyone to embrace their inner twitcher!